skip to main | skip to sidebar

an open letter to the animal welfare league of arlington

On January 27, 2008, my boyfriend and I did something that changed our lives forever. We walked into your shelter.

For months we had been researching cat adoptions and we decided to try your shelter first. Before we stepped in to your facility, we went to Target and stocked up on pet supplies. We knew we were ready to adopt and it was time to add an animal to our family.

We walked into your Cat Room and were greeted by several meows. Jesse (my boyfriend) and I knew that we wanted a young cat, not a baby, but a slightly older kitten. Other than that, we were keeping our hearts completely open, hoping to find that special kitty to connect with.

When I laid eyes on Sawyer, I knew he was the one. I glanced into his cage and his big, bright eyes met mine. I was hooked immediately. Meanwhile, Jesse was drawn to another kitty because of his beautiful markings (Huck/Danny).

We visited with both Huck and Sawyer, but connected with Sawyer more. We tried to take both home as they were roommates and got along really well, but our condo by-laws required approval for two pets as only one is allowed. With some disappointment, we decided on Huck because he was so affectionate with us. Despite the setback, I knew we had made the right decision.

Sawyer has since been renamed Dominick. He goes by many names now: Dom, Nick, Nicky, Nicky Poo, and Cutie Pie (my personal favorite). Nicky recognizes his name but doesn't come when he's called. Rather, we've trained him to come whenever I make little 'kissing' noises (sounds more like smooching than kissing, actually). And he always comes when there are treats or toys in our hands.

Jesse had read somewhere that one can teach a cat how to do tricks so he's been training Nicky. Nicky can now sit on command (with treat in hand, of course) and he can even fetch (treat optional)! We've been trying to teach him to lie down, but that's been a bit harder to do. Still, with patience (and LOTS of treats) we know Nicky will get there eventually.

Dominick has grown so much since we adopted him. But I have too. He's brought out maternal instincts that I didn't think I possessed. As much as I want to protect him from all that is harmful in the world, he's taught me that sometimes I just need to trust and let go. I used to watch him all the time to make sure he didn't climb anything too high. Now I know that he is ready to climb high and take big leaps. And when he isn't, Nicky cries for his mommy and I come running.

I want you to know that you've placed Dominick in a very loving home. He wears the pants in the family and is actually quite spoiled. I buy him a new toy every week because I LOVE how excited he gets when he's about to receive something new.

But the greatest feeling is seeing that love being returned. Animals do have a great capacity for love. I see it in Nicky every day. Whether it's a gentle nudge against our legs or a sweet lick to my nose while I'm sleeping, his displays of affection are always appreciated.

And speaking of appreciation, thank you for all that you do. Thank you for getting us ready to prepare our home for Dominick. And thank you for taking care of him until the day we finally met. I don't know if Nicky remembers his time in the shelter. But I know that I will always remember your kindness and compassion for all animals, especially our little fur baby.

Here are some pics of our little Nicky. 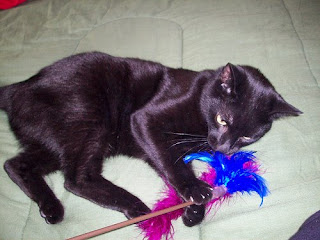 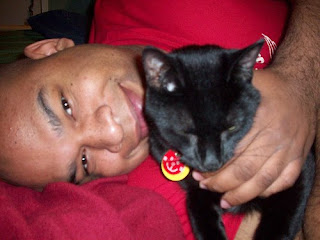 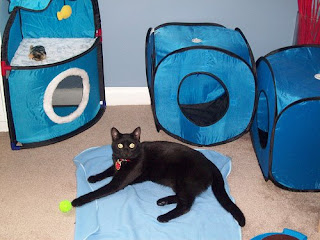 You can view the full collection here.

blogged by an orange county girl at 2:59 PM

I give this post 5 paws!!
He is lucky to have such great owners. Its too bad kitties can't do play dates lol.

My Chloe cat will sit at one end of the kitchen and I will sit at the other and will roll the ball back and forth. They are pretty smart animals.

ch 20210--awww, thanks. and yes, kitties are pretty smart. nicky won't even play with his ring-around-the-mouse game any more since he figured out that he'll never be able to catch the mouse. but it was fun watching him try.

and how cute is chloe for playing catch with you!

an orange county girl
D.C. area, United States
"East is East, and West is West, and never the twain shall meet until the OC girl creates a blog." Rudyard Kipling